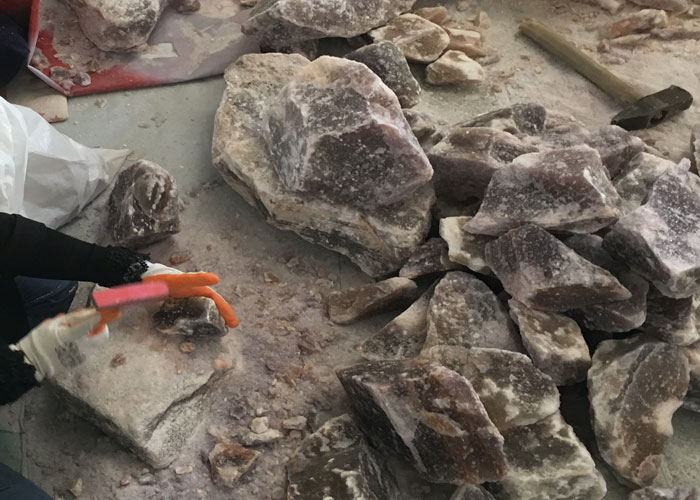 At one time almost all the salt used in commerce was produced from the evaporation of seawater, and sea salt still is a staple commodity in many maritime countries, especially where the climate is dry and the summer is long. Commercial salt is manufactured from rock salt, as well as from seawater and other natural and artificial brines. Most of the artificial brines are obtained by pumping water into underground salt beds. A considerable amount of brine itself is used directly in industrial countries.

The beds of rock salt are mined or quarried by the usual excavation methods, depending on the depths and thicknesses of the deposits and on local conditions. The mined rock salt sometimes is dissolved and the salt manufactured by treatment of the brine, as described below. The method affords opportunities for purification of the salt. When the rock salt is of a high degree of purity, as in Poland and the United States, the salt may be ground, screened, and marketed without further processing. The salt is mined in large lumps that are first crushed, then more finely ground and screened by size into various grades; the salt is then bulk-loaded into trucks, hoppers, or barges or loaded into bags for further handling. Bulk handling has been greatly facilitated by the use of anticaking agents which allow the salt to be stored uncovered and outdoors without becoming a hard mass again.

Manufacture from seawater and brines

Only a certain quantity of salt will dissolve in water at any given temperature. Once the solution contains as much salt as it can hold, it is said to be saturated; any further additions of salt will not dissolve. Evaporation is the reverse of this process. When an aqueous solution of several salts (seawater, for example) is evaporated, each of the salts precipitates as it reaches its point of saturation in the solution. Thus, the different salts in seawater will precipitate at different times, forming layers on the bottom of the evaporating pond. For seawater and many brines, the order of deposition is calcium carbonate, calcium sulfate, sodium chloride, magnesium sulfate, potassium magnesium chloride, and magnesium chloride.

In maritime countries where there is a negative evaporation rate—i.e., the amount of water evaporating exceeds the amount of rainfall by at least 75 cm (about 30 inches)—salt is produced by solar evaporation from seawater. The processes used are similar in general principle from country to country, but details of equipment vary from sophisticated in the United States to quite primitive in developing nations. 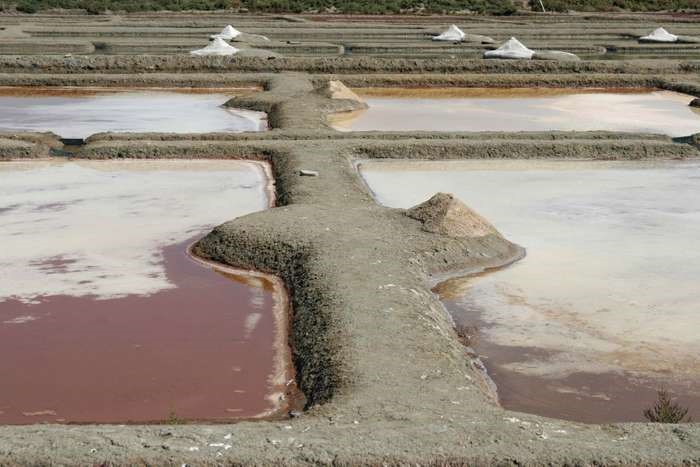 A preliminary concentration is usually accomplished by allowing the seawater to flow through a series of gates constructed of wood or a combination of wood and concrete into a series of shallow ponds separated by dikes. In these ponds the solution is concentrated to a specific gravity of about 1.22; this means that a given volume of brine is 1.22 times as dense as a given volume of pure water. At this stage, suspended impurities such as sand, clay, and the less soluble salts such as calcium carbonate, or chalk, and calcium sulfate are removed. Solar evaporation of the Dead Sea water is hastened by adding dye to the water. The dye permits more heat to be absorbed from sunlight in thinner layers of brine so that shallow ponds may be used and the penetration of brine into the ground is reduced.

Once it has been concentrated, the brine is run through a series of crystallizing pans, usually four in number, where the salt is deposited as evaporation proceeds. In the first crystallizing pan, the brine is concentrated to a specific gravity of 1.23 and remains partly contaminated with calcium sulfate. The specific gravity of the solution in the pan increases slowly during crystallization of the salt, reaching 1.24 in the second pan. In the third pan the specific gravity of the solution reaches 1.25, and the salt deposited there contains small amounts of magnesium sulfate as an impurity. The final solution, termed bitterns, has a specific gravity of 1.25–1.26 and is used in some countries (United States and Israel) in the manufacture of potash, bromine, epsom salts (magnesium sulfate), and magnesium chloride.

In developing countries the salt in each crystallizing pan is raked into rows, where it is allowed to drain for several days. After that it is collected into heaps, drained again, lifted from the pans, and finally dried. In industrial countries the salt is harvested mechanically and washed with saturated brine. It is then dewatered, washed with fresh water, and stored for further processing or direct sale.

Use of artificial heat

In areas where bedded deposits can be solution-mined, evaporated salt is recovered from these solutions with artificial heat. Some evaporated salt also is made from natural brine or solar salt. Formerly, brine was concentrated in open pans over fire. More recently, steam-jacketed vessels have been used. The largest amount of salt produced in the colder climates is rock salt. The largest amount of evaporated salt is produced by multiple-effect vacuum evaporators, and an important quantity is made in so-called open crystallizers or grainers that produce a type of crystal preferred for use in some of the food industries. The brine, natural or artificial, is first pumped into settling tanks, where calcium and magnesium compounds may be removed by chemical treatment. In grainer operations the settled and filtered brine is delivered to the grainer, a long open trough heated with steam coils. The brine is fed into the grainer at approximately the same rate at which evaporation is taking place and at a temperature only slightly below that of the brine in the grainer. The residue of brine, or bitterns, may be removed continuously, once a day, or less often. Evaporation occurs at the surface of the liquid, and the crystals originate there. They remain at the surface, held up by the surface tension of the brine. The crystal grows at the top edges, becoming a small inverted hollow pyramid, or hopper. Eventually the hopper sinks and ceases to grow. When the crystals are recovered, the salt is largely in the form of flakes, hence the name flake salt.

When multiple-effect evaporators are used, the vacuum in each vessel is adjusted so that the vapour from the first vessel is hot enough to boil the brine in the second, the vapour from the second supplying the heat to operate the third vessel or effect. The brine is usually sent through the stages or effects in succession, although in the case of salt manufacture fresh brine may be fed to each stage if desired. With open pans, 4,500 to 5,400 kg (10,000 to 12,000 pounds) of steam are required to produce 900 kg (1 ton) of salt. With triple-effect evaporation, 630 kg (1,400 pounds) of steam produce 1 ton of salt.

The Alberger process is partially a vacuum-pan and partially a grainer operation in which cubic crystals are formed in the solution fed to the grainer pans by a partial vacuum-pan evaporation. These seed crystals in the grainer produce a salt that is a mixture of the grainer-type flake and the flake grown on seed crystals. About 1,360 kg (3,000 pounds) of steam are required to produce one ton of salt. Salt from the Alberger process is centrifuged (spun) from the brine and then dried. Table salt may have small amounts of aluminum calcium silicate, calcium silicate, magnesium silicate, tricalcium silicate, magnesium carbonate, or tricalcium phosphate added to keep it free-flowing. Iodized salt has potassium iodide added. In some countries yellow prussiate of soda, to prevent caking, is added in minute amounts as regulated by the government. 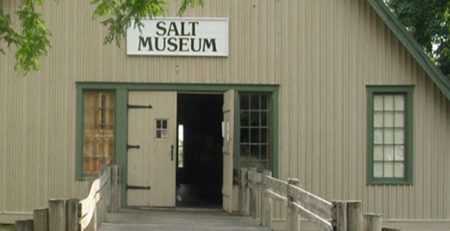 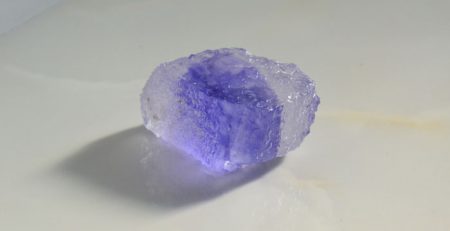 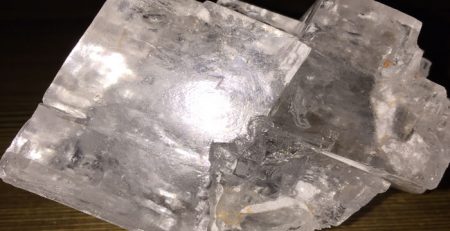 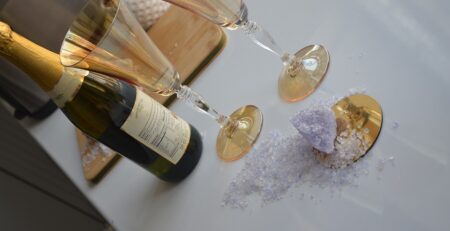 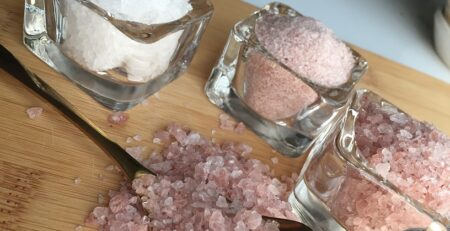 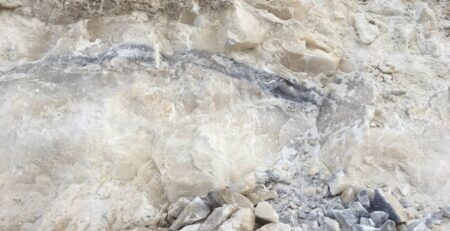 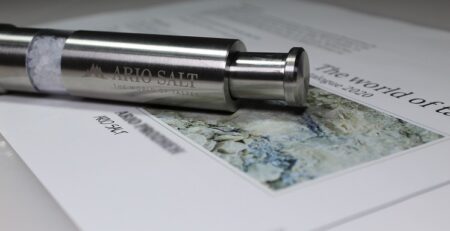 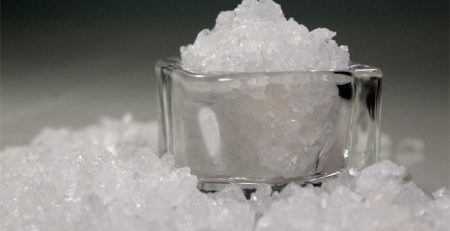